With Donegal’s imminent move to Level Three of the Plan for Living with Covid-19 now confirmed until October 16 next, this has implications for all of the planned programme of Donegal Bay live music and theatre performances at the Abbey Arts Centre, Ballyshannon and the Balor Arts Centre, Ballybofey. Due to the additional restrictions on indoor,  public gatherings that will follow, it will not now be possible for these venues to host any of the Donegal Bay and Blue Stacks Festival live performances as advertised, as the period of Level Three Restrictions coincides directly with the festival dates.

As such, the  Festival,  the venues and the artists impacted are working together to devise optimal solutions for each impacted event. Our collective aim will be to save as much of the festival programme as possible by rearranging performance dates to late October and into November.  The Festival website www.donegalbaybluestacks.com will be regularly updated to inform the public of details of rearranged performances, or other possible solutions such as online broadcasts.

Members of the public who have already purchased tickets for festival events which cannot now take place on their advertised dates may opt for a full refund immediately, or they may wish to rebook for their particular event, as rescheduling is organised over the coming days. Please check with the festival website or contact the venue where the booking was made, for further updates.

Meanwhile, the Festival’s online programme commences this evening (Friday, September 25) with the first episode of Dark Daughter’s four-part online drama, Drumshee Days, which you can enjoy from 7:00pm on the festival Youtube channel, via the festival website www.donegalbaybluestacks.com

Abbey Arts Centre are delighted to offer their event Zandra, Queen of Jazz video on demand Sunday, 4th of October due to reduced capacity for indoor events. With Video on demand, we can all be audience members!

Experience ‘Zandra, Queen of Jazz’ at The Abbey Arts Centre in Ballyshannon as part of The 20th Donegal Bay and Blue Stacks Festival! This performance will be recorded live on October 1st, 2020 and released as a Video On-Demand on Sunday, 4th of October for all who are unable to attend the performance due to the current COVID-19 restrictions.

A Darn Skippy Production in association with Katherine Soloviev 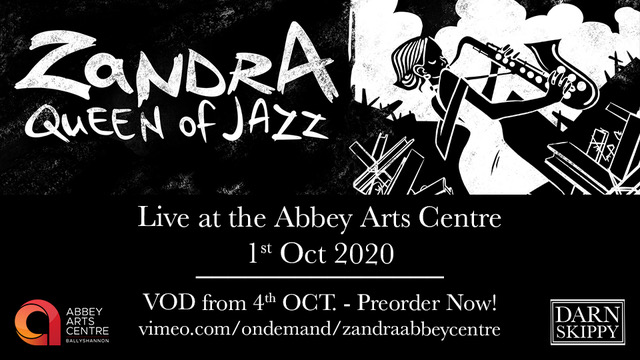