Celebrated Ramelton World War 1 frontline health worker, Nurse Catherine Black, OBE, looks back on an extraordinary life, which took her from the battlefields of France to the court of King George V of England. Born in 1878, her family ran a draper’s shop in the town. Catherine’s passion however was for nursing and she moved to England as young woman, working in various hospitals before volunteering for military service after the outbreak of the first World War. Maintaining a diary as she went, she published an account of her tumultuous life in her autobiography, King’s Nurse, Beggar’s Nurse, in 1939.

‘Catherine Black is coming to the end of a remarkable life. She has been exposed to the best and worst of humanity, and has always focused valiantly on forgetting the latter. At last she realises that the past doesn’t go away, and that the only way to forget is to remember.’

Margaret Hannon is an actor, theatre-maker and writer based in Ramelton. She excelled in the role of Antonia in Bread and Roses Theatre’s brilliant production of Dario Fo’s Can’t Pay, Won’t Pay, seen at the Abbey Arts Centre as part of the 2015 Donegal Bay and Blue Stacks Festival. Thereafter she travelled to Prague to study at the DAMU Academy of The Performing Arts and on returning to Donegal last summer, she took a leading role in the Shaking The Tale project, An Grianán Theatre’s epic, promenade performance of Shakespeare’s A Winter’s Tale.

Sister Black has been created with the support of Donegal Arts Office, Echo Echo Dance Studios, Derry/L’derry and An Grianán Theatre, Letterkenny.

It had a virtual debut last year thanks to support from An Grianan Theatre, Letterkenny. And there was a short virtual tour including An Grianan Theatre; Town Hall Theatre, Galway; Riverbank Arts Centre, Newbridge; and Watergate Theatre, Kilkenny.  It’s very exciting to be planning for this live premiere! 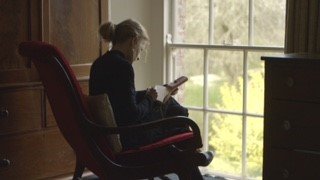