Skip to content
Previous Next
One Act Drama
Theatre

Delighted Ballyshannon Drama Society are back on stage, with live performances and will present two one-act plays on October 7 & 8th  in the Abbey Arts Centre, Ballyshannon, at 8pm nightly. This promises to be a wonderful night of entertainment for all, with two very different productions.

To begin, we have the one-act comedy ‘A Bit of Land’ by Agnes Adam, directed by Rachel O’Connor. Most recently seen on stage asking questions about handbags, Rachel since directed the hit production of ‘West Side Story’ in the AVS. Rachel also directed the hilarious ‘Play On’ in the Abbey Centre, and so we look forward to plenty of laughs with this show! The cast includes Callum Gallagher, John Travers, Sean McLoone, Andrea Whelan, Margaret Timoney and Frankie O’Donnell.

To balance the comedy, we have ‘Faint Voices’ by John Mc Kenna, directed by Ann Mc Hugh. Ann’s last one-act production, ‘Five Kinds of Silence’ won many awards on the festival circuit, and took home Second Place in the All Ireland Finals in Letterkenny in 2017. Of course, several of Ann’s full-length productions made it to the All Ireland Finals as well, such as ‘God of Carnage’ and ‘The Gingerbread Lady’, with ‘Steel Magnolias’ coming first in the Confined Finals. The cast includes Audrey Davitt, Terence McEneaney, Sean Donegan and Rachel O’Connor.

‘Faint Voices’ portrays the doomed relationship between the WW1 soldier-poet Francis Ledwidge and his lover Ellie Vaughey, and the impact of his death on family and friends. Ledwidge, known as the ‘Poet of the Blackbird’, was born near Slane and served in the British Army. He was killed in the Battle of Ypres in 1917.

A Bit of Land by Agnes Adam

A rollicking comedy! Tommy Boyle persuades Dan Murphy to impersonate his recently deceased father for the purpose of making a will. After a hurried make-up, Dan jumps into bed and poses as the dying man. The schoolmaster arrives to make the will…but things don’t go quite as planned, with hilarious results! 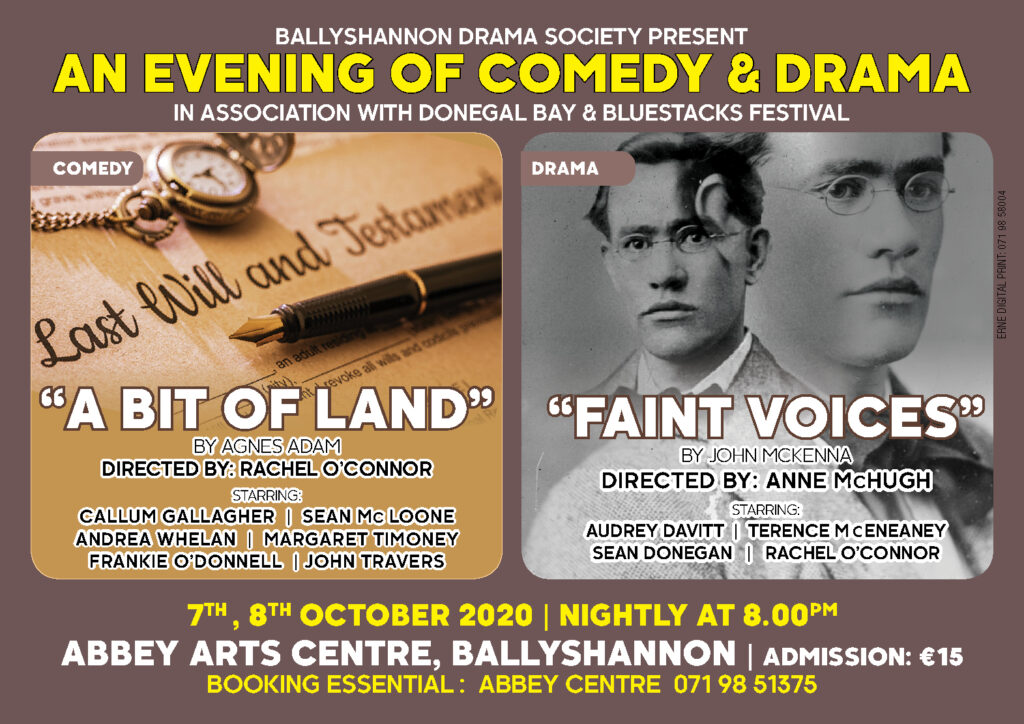 AbbeyArtsCentre2020-09-08T16:35:16+00:00
We use cookies to ensure that we give you the best experience on our website. If you continue to use this site we will assume that you are happy with it.Ok
Go to Top